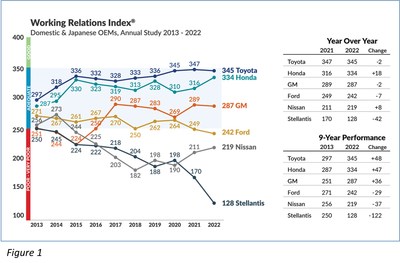 Toyota, in the top position, dropped 2 points to 345, while Honda gained 18 points and rose to 334, narrowing the gap between first and second to 11 points. GM fell 2 points to 287, maintaining its gap to Toyota while increasing its lead over Ford as Ford fell 7 points to 242. Nissan improved 8 points to 219, closing in on the top four OEMs. Stellantis dropped 42 points to 128 (see Figure 1).

Most improved overall this year were Honda and Nissan. The spread from highest (Toyota 345) to lowest (Stellantis 128) was 217 points, the greatest since 2008 spread of 206 between the same two automakers. But the numbers don't tell the whole story.

"The industry was hit with unprecedented challenges this past year that created tensions with suppliers that will only get worse if they're not resolved," said Dave Andrea, Principal in Plante Moran's Strategy and Automotive & Mobility Consulting Practice, which conducts the annual study. "Combine the supply chain disruptions with the accelerating shift to EVs that will negatively impact many suppliers, and OEM supplier relations could become unnecessarily strained unless this transition is handled in an open and honest manner."

The key to mutual success in OEM-supplier relations is trust, said Andrea, and trust is based on three factors: setting realistic expectations; delivering on commitments; and sharing information.

Trust goes both ways, he said.  "Companies get out what they put in. In the new world of scarce resources with numerous customer opportunities, the supplier has to ask himself:  who would I rather do business with, my customer of choice? And the answer comes down to three questions: Who do I trust? Where will I get the best return on investment? And, what is the prospect for future business? And the OEMs are equally dependent on suppliers they can trust."

"The OEMs really need to focus on more transparency and better communication. They need to better align purchasing, engineering, and manufacturing to achieve the same goals – improved communication, efficiency and speed – in order to take cost and time out of the entire supply chain while helping suppliers achieve their cost and financial performance goals as well. These processes must become more agile and streamlined to benefit both the OEM and supplier. If done property, it's win-win, and setting realistic goals, fulfilling commitments, and sharing information openly and honestly doesn't cost any money."

Andrea listed areas of on-going concern to suppliers that could be resolved if given priority and if resolved would greatly benefit both the suppliers and the automakers. They include:

"All of these typical problems can be resolved"," said Andrea. "Look how fast and successfully automakers switched to the production of Covid face masks and respirators. When there's corporate commitment, things get done – fast. These are not complicated issues. And if resolved, the automakers will be more profitable, improve vehicle launches, reduce warranty claims and recalls, and better positioned to transition to EVs."

The WRI is important because it measures the OEM purchasing organization's capacity and capability not only to handle day-to-day business, but also their ability to respond to unexpected market disruptions like those faced by automakers this past year. The OEM buyer is on the front line here, but so is the supplier.

Honda built its gains on "purchasing effectiveness" which involves timely communi-cation, resolving issues, and buyer accessibility among other characteristics shown in Table 1. In Overall OEM Purchasing Organization Effectiveness Honda lead in six of the seven categories with a composite average score of 3.45. Toyota remained in second, tying its last year score of 3.30; GM dropped slightly but remained in third place with 3.20; Ford remained in fourth at 2.86. Nissan was up slightly at 2.79; and Stellantis dropped significantly to 2.23.

"The automakers will have to continue building on these fundamentals to survive near-term parts shortages like the scarcity of microchips, and truly deepen supplier relations to support the transition to electric vehicles which could involve taking more technologies in-house, making new acquisitions or forming partnerships to gain technical capability or to manufacture parts and components. These industry challenges put more pressure suppliers and on OEMs to respond and resolve issues faster."

The Study has shown the cornerstone of good working relations to be trust and communication, particularly important factors in the current uncertain business environment with billions of dollars and thousands of jobs at stake. Figure 2 shows Trust of the company in general, and substantial gains for Honda and Nissan with Ford down slightly and Stellantis down substantially.   Note how the Trust rankings track the overall WRI rankings.

Figure 3 show supplier trust of the Buyer where Nissan, Honda and Toyota made gains. Off a significant gain in 2021, GM was down in 2022 but is still rated above its 2020 level. Ford has been down each year since 2020, while Stellantis was also down significantly.

Continuing the focus on the key role of buyers in the overall WRI score, the Buyer Characteristics Index (see Figure 4) specifically ranks their performance. The BCI™ focuses on key attributes such as the buyer's knowledge, communication, and overall working characteristics such as integrity and trust. Organizational changes can affect this measure, as does the pressure of the changing business environment. Even so, Honda and Toyota were ranked one and two and are improving, while GM was in third place and trending down. There was a significant gap to the next group of Ford and Nissan, with Ford trending significantly downward and Nissan on the upswing. "The buyers, while always on the front line, play an essential role in improving communication frequency, transparency and accuracy"," said Andrea.

The rankings in the overall WRI® provide high-level insight, but the study also delves deeply into OEMs' specific purchasing areas. By examining each specific area, management can determine where improvements are needed. As shown in Table 2 above, Toyota ranks best in five of the eight specific purchasing areas, with Honda best in the other three. It is especially noteworthy that in the two most important areas going forward -- autonomous vehicles and EVs -- Toyota ranked highest in EV & Hybrid Powertrain and in Electrical & Electronics.

For years, Toyota has led the industry in supplier relations. As Table 3 shows, Toyota was first in three of four indexes – but Honda is moving up. Toyota is also the automaker that suppliers prefer to work with, and receives the benefits that go with that preference. But Toyota's WRI line has essentially been flat since 2015. That could change, with Honda showing new commitment to improving its WRI ranking, said Andrea.

About the Working Relations Index® Study
Now in its 22nd year, the 2022 North American Automotive OEM-Tier 1 Supplier Working Relations Index® Study was conducted by Plante Moran from mid-February to mid-April. Respondents are salespersons from Tier-1 suppliers serving the Top 3 Detroit and Top 3 Japanese automakers. The annual study tracks supplier perceptions of working relations with their automaker customers in which they rate them across the eight major purchasing areas broken down into 20 commodity areas. The results of the study are used to calculate the WRI® which can then be used to calculate the economic value of working relations based on a proprietary economic model.

Respondents were 673 salespersons from 436 Tier-1 suppliers, representing about 50% of the six OEMs' annual buy. The sales personnel provided data on 2,226 buying situations (e.g., supplying brake systems to Ford, tires to Toyota, seats to GM). Demographically, the supplier-respondents represent 41 of the Top 50 NA suppliers and 71 of the Top 100 NA suppliers.

The study was founded in 2001 by Dr. John Henke, CEO of Planning Perspectives, Inc., and acquired by Plante Moran in 2019. The study is watched carefully by automakers because their supplier relations rating on the Working Relations Index® (WRI®) is highly correlated to the benefits that the OEM receives from its suppliers, including better pricing, more investment in innovation and technology, more sharing of technology, and better supplier support, all of which contribute to the OEM's operating profit and competitive strength. 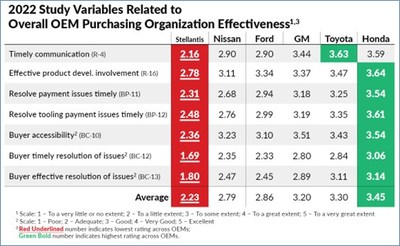 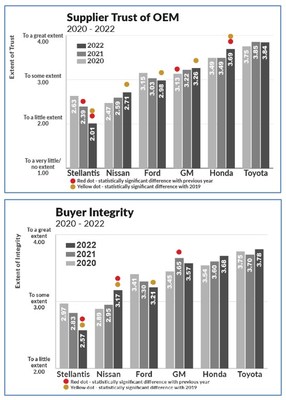 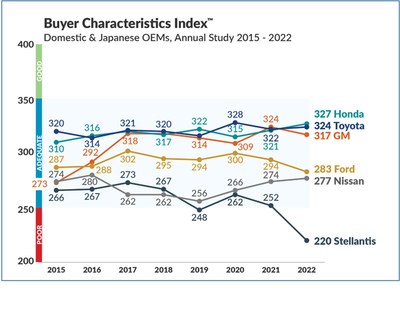 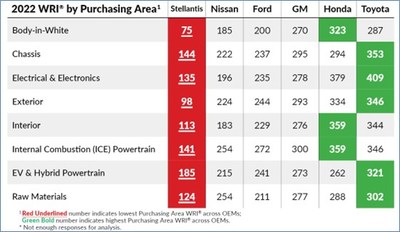 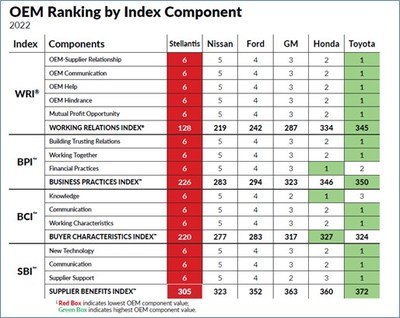